Ten years ago, I was working on Reporting Under Fire: 16 Daring Women War Correspondents and Photojournalists with Chicago Review Press. I’m giving several programs about these heroes this month to both young people and lifelong learners like me. (Read more here: https://kerriehollihan.com/books/reporting_under_fire/ )

Now comes a new title on a woman who bore witness to the Vietnam War. She was Catherine Leroy, whose name I’d encountered as I researched the American women I wrote about in Reporting Under Fire. Leroy, however, was French.

Today I posted a Goodreads review of this important book…..

Mary Cronk Farrell’s Closeup on War: The Story of Pioneering Photojournalist Catherine Leroy in Vietnam is a treasure for those who seek a deeply personal glimpse into the Vietnam War. It’s an excellent tool for junior high and high school educators to supplement their lessons.

Farrell’s narrative offers more than one lesson. Closeup on War focuses on combat overseas and how people at home got their news. It’s a chronicle of war and a history of journalism—both in the eyes of a young woman who from all appearances seemed unfit for the task. 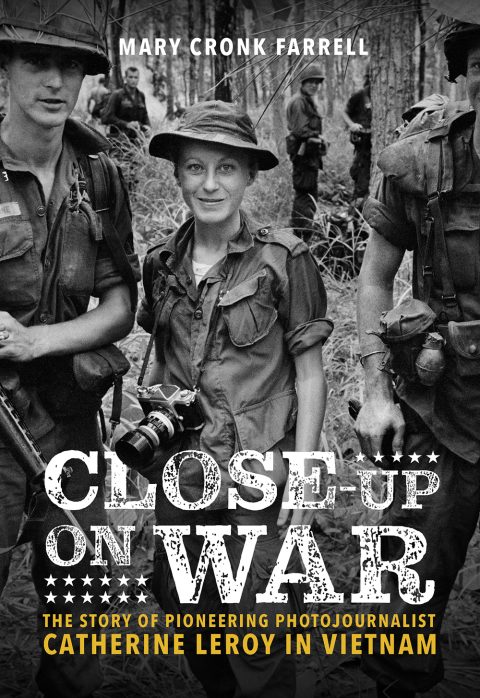 At twenty-one, Catherine Leroy left her home in France for Saigon, soon to be armed with two cameras loaded with black and white film and not much more. Fifty years on, it seems almost incredible that a petite Frenchwoman could muscle her way as a freelance photographer in a war zone with no support from a news agency, newspaper, or broadcast network. But Leroy was one of a series of tough, goal-minded female journalists and photographers who worked their way into war zones from the mid-nineteenth century onward. Today, women reporters are far more prevalent—and, one could hope, accepted in the battle zones they cover and by the military officers on whom they rely.

There has been mention that much of Farrell’s book deals with small, daily matters of little import–asking for care packages from home, warm showers, and a good night’s sleep. But after researching and writing about such women across the twentieth century, I can vouch for those small moments in their lives. Thirty years ago, freelance journalist Janine di Giovanni treasured a bucket of warm water in a bombed-out Sarajevo hotel in Bosnia so she could wash her hair—this when she wrote about the young dead men whose bodies rotted in the “shimmering heat” on Gogo Brdo, Naked Hill.

Catherine Leroy did the same, savoring those short breaks of cleanliness and rest from hot, stinking work as a photographer alongside—embedded, we now say—soldiers engaged in ground combat. Among those fighting men, Leroy was a rare bird as she jumped from a C-129 cargo plane and parachuted into the fight. At one point she was captured by North Vietnamese soldiers but managed to shoot their images. She made heart-rending photos of civilians and refugees.

I was in high school when Catherine Leroy went to Vietnam. Farrell’s narrative offers up so many terms we heard on radio and TV:  “Khe Sanh,” “Hill 881,” “Da Nang,” “Tet.” These have stuck in my mind over the years, and now they resurface. They are painful.

For her Close-Up on War, Mary Farrell gleaned a number of Catherine Leroy’s photographs, shot in the field with an eye for public view in stark black and white. These are chilling enough. Farrell’s worthy contribution of Leroy’s dispiriting words—not written for public eyes—also ring true to readers a half century after Catherine Leroy wrote them.

Cook a S’more in the SUN!